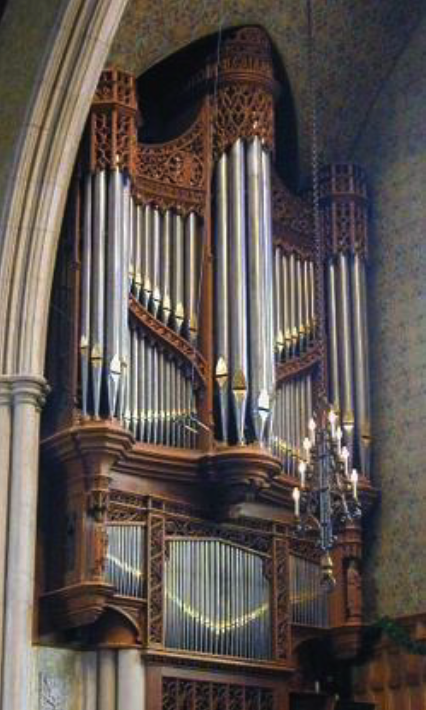 Primary among the organ’s roles is that of supporting congregational song while its colorful palette allows for an eclectic repertoire to be successfully presented.

The current sanctuary organ was installed in 1988 by the Bedient Pipe Organ Company. It replaced the original E. M. Skinner instrument which had been installed when the sanctuary was built in 1928. The organ’s distinctive design is inspired by French organs of the eighteenth and nineteenth centuries. Instruments of this style are particularly known for their colorful and aggressive reed voices. The Idlewild organ contains a rich collection of thirteen different voices from the reed family. While the Idlewild organ sounds especially impressive in the French Baroque and Romantic literature it is beautifully capable of bringing to life the full range of organ literature. It is a fine instrument for leading congregational song. It is tuned in Valotti temperament.

The two facing cases of speaking lead pipes with gold leaf accents frame the four divisions of the instrument: Grand Orgue, Positif Orgue, Récit, and Pédale. Fine carvings in oak include images of King David, Johann Sebastian Bach, Wolfgang Amadeus Mozart, and the eighteenth-century hymn-writer, Charles Wesley. The organ case carvings were executed by the same Black Forest artist who provided other carvings in the sanctuary. A detailed stop list of the instrument can be found online. 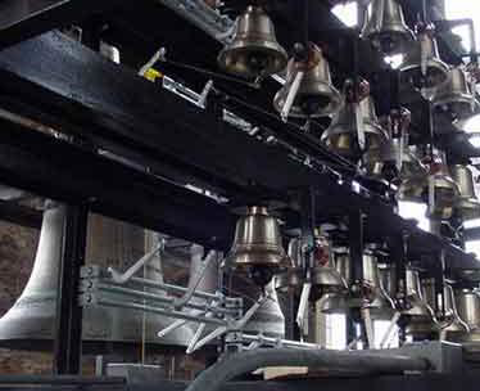 Idlewild possesses the only carillon in Memphis – the largest musical instrument in the Mid-South. It is housed in an English gothic stone tower which rises majestically 120 feet above the church’s sanctuary. Its forty-eight bronze bells were cast at the Paccard-Fonderie de Cloches in Annecy, France. They range in weight from 29 to 4,397 pounds, totaling more than 26,890 pounds.

Forty-four of the bells are stationary while the largest four swing during peals or random ringing. Due to the varying sizes, the smallest of the four bells rings first, the next largest follows, and so forth.

Due to stressful economic times, when the building was opened, the bell tower remained empty. Fifty-two years later, in 1980, 23 bells were installed as a gift from Billy Christians, a former Idlewild Director of Music. The carillon was completed in 1999 with the installation of twenty-five more bells. A concert to inaugurate the finished carillon was played by carillonneur Paul Hicks on December 31, 1999 at 11:59 p.m. as a welcome to the third millennium.

Carillonneurs David Caudill and Peggy McClure provide carillon concerts several times a year in addition to playing twice every week as a gift to the community.

Can’t be here for worship? Join us Sundays Live at 11:00 on the radio (96.1 FM) or via Livestream.
Watch on the Livestream App (in the Livestream app, search for “Idlewild”) or click below.

GET REGISTERED FOR UPCOMING EVENTS!